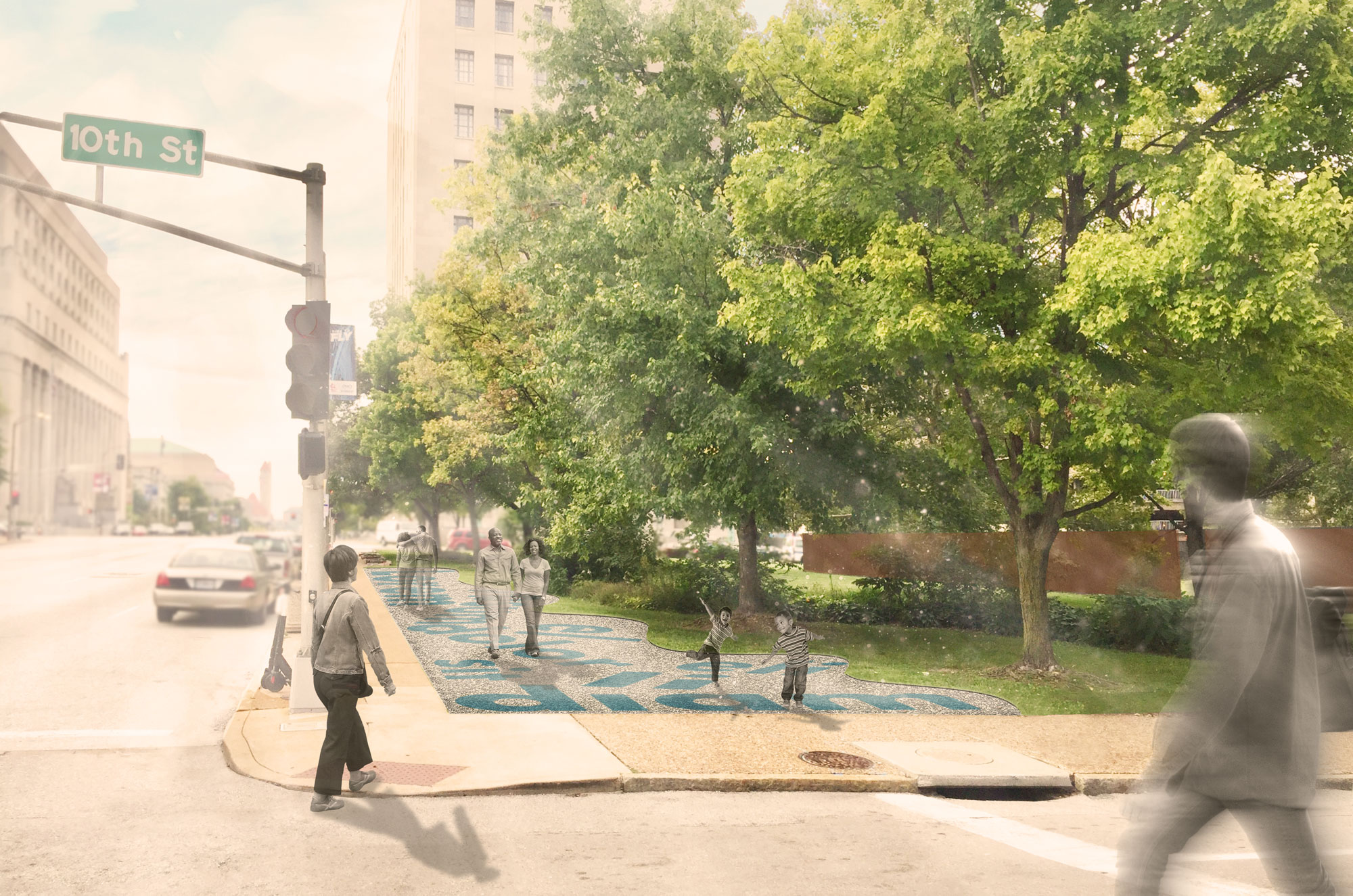 Dear St. Louis / Sincerely, St. Louis is a proposed installation sited in downtown St. Louis, Missouri. Designed in response to a temporary public art competition, the project was conceived as an interactive, community generated “letter” both to and from the people of the city, and sought to challenge the notion of traditional object oriented public art; instead proposing a temporary activation of an underutilized public space though an interactive landscape-based art installation.

The proposed site is on the southern edge of Serra Sculpture Park, located about halfway along St. Louis’ historical and controversial Gateway Mall, which spans approximately 18 almost continuously uninterrupted blocks from the Gateway Arch Park on the Mississippi River, west, to 21st Street. The Serra Sculpture Park contains its namesake, the large and controversial sculpture “Twain” by Richard Serra, installed in 1981.

Functionally, Dear St. Louis / Sincerely, St. Louis serves to connect the highly trafficked City Garden Park (east of the proposed site) to the City Courthouse site (located to the west). Presently, heavy pedestrian traffic along the generous allée-shaded sidewalk on the south side of City Garden does not continue west across 10th street into Serra Park, where the sidewalk transitions into a narrower standard city sidewalk. This pedestrian bottleneck and lack of activation beyond City Garden is significant because City Garden is the last, western-most active landscape along the Gateway Mall, despite the Mall continuing for another 10 city blocks. While Dear St. Louis / Sincerely, St. Louis would only be installed for one year, the project would act as a test-case, laying the groundwork for a more permanent activation of public space and creating a framework for encouraging pedestrians to expand their use of the Mall and the broader downtown area.

Dear St. Louis / Sincerely, St. Louis is a softscape plaza which grows out of the existing standard width sidewalk on site, acting as a continuation both in design and alignment of the City Garden’s south promenade. The plaza borrows from river-inspired curvatures in the adjacent park, engraving them as a site-specific gesture that curves around the drip-line of the existing tree canopy (to mitigate tree stress). The pedestrian-friendly gravel softscape contains a field of colorful super-text, generated from statements gathered from the public in the surrounding area and from across the city. Over time, as people move across the site, the colorful super-text will blend into the surrounding gravel, shifting from discrete words and meaning to a palimpsest of diffuse color. The site of public art is more than an object – it is an opportunity for the public and the civic landscape to respond to each other in an earnest and poetic way.

An important component of this project was finding engaging and effective methods for gathering thoughts, comments, and statements from the St. Louis community about their city. Of the community feedback mechanisms that were considered, one was an informational postcard that could be distributed and collected in a variety of ways including passive on site “mail-boxes” and at volunteer-run canvassing days. Instructions were printed on each card, giving those who were digitally-inclined the opportunity to photograph and hashtag their replies on social media.

These postcards, as well as a material test of the custom-dyed colorful gravel, were tested on Park(ing) Day 2019. During this event a test area was set up along with a pocket park where visitors could learn about the project and fill out postcards. The response from the public was overwhelming, with over 60 postcards completed in only a few hours, all with a range of thoughtful, critical, funny, and poetic comments about the city we call home.